Some time ago my Spanish colleague Belén Lopez published an article regarding a list of Spanish defaulters, which was given out to the public by the Spanish tax authorities. As in Spain, the Greek tax authorities have recently published a similar list. Since July 2016, the General Secretariat for Public Revenue allows access to that data for all citizens, to engage the public interest into the progress and efficiency of the Greek Tax Administration.

The Greek Tax Authorities have published two different kind of lists: one for companies and one for individuals. Each person or company included on that list, owes at least €150.000 to the Greek government. The list contains defaulters that have been notified by the government, but have not settled their debts. However, the list does not contain debtors who have reached an agreement with the government. This could include a postponement in paying the debt, or an agreement to pay by installments. More information can be found at the website of the Tax Authorities, www.publicrevenue.gr/kpi/.

Among the people or companies on the list, one can find a diversity of names, such as a insolvent bank, a fashion designer or a criminal felony. To many people’s surprise, a Greek football team (AEK Athene) is also included in the list, indebted to the government for the total amount of 249.881.951,71 euro.

Do you trade with companies or entrepreneurs in Greece? Are you curious if your Greek business partner is on the list? Or are you considering to conduct business with a Greek company and you would like to know if this company is on the list? You can consult the list for companies here, and the list for individuals, here. Please feel free to contact me if you have any questions about the lists.

For a quick answer, you can search by name (or part of it) or by vat identification number (Α.Φ.Μ.). The amount that appears in the column ‘’Σύνολο’’ shows the total debt for each name.

Does your company have a Greek customer who is not paying your invoice? Our Greek debt recovery lawyers have the means to make your debtor pay. 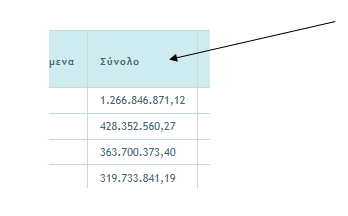